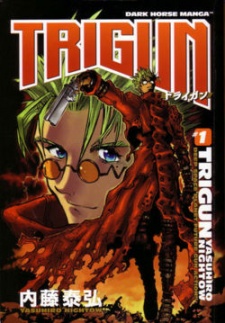 Much of the damage attributed to "Vash" is caused by the activities of bounty hunters who are after the 60,000,000,000$$ (sixty billion "double dollars") reward on Vash's head for the destruction of a city called July. Vash does not clearly remember the destruction of July, and only wants "love and peace", as he puts it; though he is a gunfighter of inhuman skill, he uses his weapons only to save lives wherever he can.

As the series progresses, more is gradually learned about Vash's mysterious history and the history of the human civilization on Gunsmoke, the desert planet the series is set on. The series is often humorous in tone, but at the same time it involves very serious character development and especially in later episodes it becomes quite emotionally intense. Vash is occasionally joined by a priest, Nicholas D. Wolfwood, who is almost as good a gunfighter as Vash himself, and later is targeted by a band of assassins known as the Gung-Ho Guns for reasons which are mysterious at first.