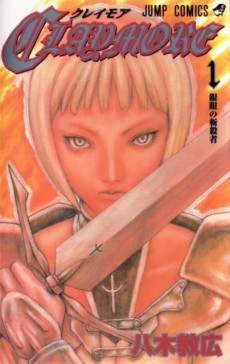 In a world constantly haunted by demonic predators known as "Youma", the everyday life of humans is full of fear and suspicion, as these monsters easily blend into human society to hunt their hapless prey. However, in this world, there is also a mysterious organization, employing half-human, half-Youma warriors to effectively track down and kill the demons. Called "silver eyed witches" or "Claymores" after the huge Claymore swords they carry, these female warriors are eyed with suspicion and distrust by most because of their inhuman powers.

But there are many currents flowing in the shadows, from the mysterious machinations of the Claymore "Organization" and the twisted ambitions of the powerful "Abyssal Ones" to the hopes and desires of each Claymore warrior. This story follows the fate of Clare, one of the Claymore operatives as she sails deeper and deeper down the currents of conspiracies and revenge.