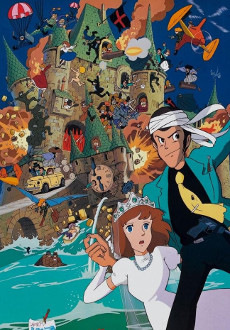 After a successful robbery leaves famed thief Lupin III and his partner Jigen with nothing but a large amount of fake money, the so called "Goat Bills", he decides to track down the counterfeiter responsible - and steal any other treasures he may find in the Castle of Cagliostro, including the 'damsel in distress' he finds imprisoned there. However, as usual, Inspector Zenigata is hot on his trail.

Tracking the legendary counterfeits known as "Goat Bills," international thief Arsene Lupin III arrives at the Duchy of Cagliostro. Once there, he nearly rescues a damsel in distress from the Regent's guards. Following his failure, Lupin takes it upon himself to save her from captivity.